You are here: Home / Entrepreneur / 12 Alarm Clock Apps That Will Get Your Butt Out of Bed

Smartphones and tablets are good alarm clocks, but these apps make them great.

There was a time when many items littered my nightstand. There was a lamp, a stack of books and comics I had every intention of reading, a point-and-shoot camera in case my dog climbed into the covers and did something adorable, and even a landline phone for those late-night calls that wake one with dread. Also, a back scratcher.

Today those items are gone, save for the lamp so I don’t stub my toe, and the back scratcher, because I still have a back. They’ve been replaced by my iPhone and its plethora of apps to keep me busy, including those that turn my smartphone into a kick-ass futuristic alarm clock.

Amid this collection for iOS and Android, whether phone or tablet-sized, features can vary wildly. But they all tell the time and get your butt out of bed in the morning. Or after a nap. Some do it gently, some do it harshly, some do it with new-age special effects, and some make you work to wake. Whatever you’re waking needs, you’ll find them here.

Rise isn’t about making you feel jangled in the morning. The multi-lingual app bills itself as a “work of art that wakes you up.” The lovely, minimalist settings require swiping up and down and left and right, but it’s filled with soothing alarm sounds with names like Grandma’s Clock, Gentle Chimes, and Jungle Morning. You can also wake to any song stored in iTunes. Setting multiple alarms for all different (or repeating) days and times is a breeze — though that feature requires a $0.99 in-app purchase. You can set the colorful clock option to monochrome and dim it down with a swipe. Snooze it with a shake. 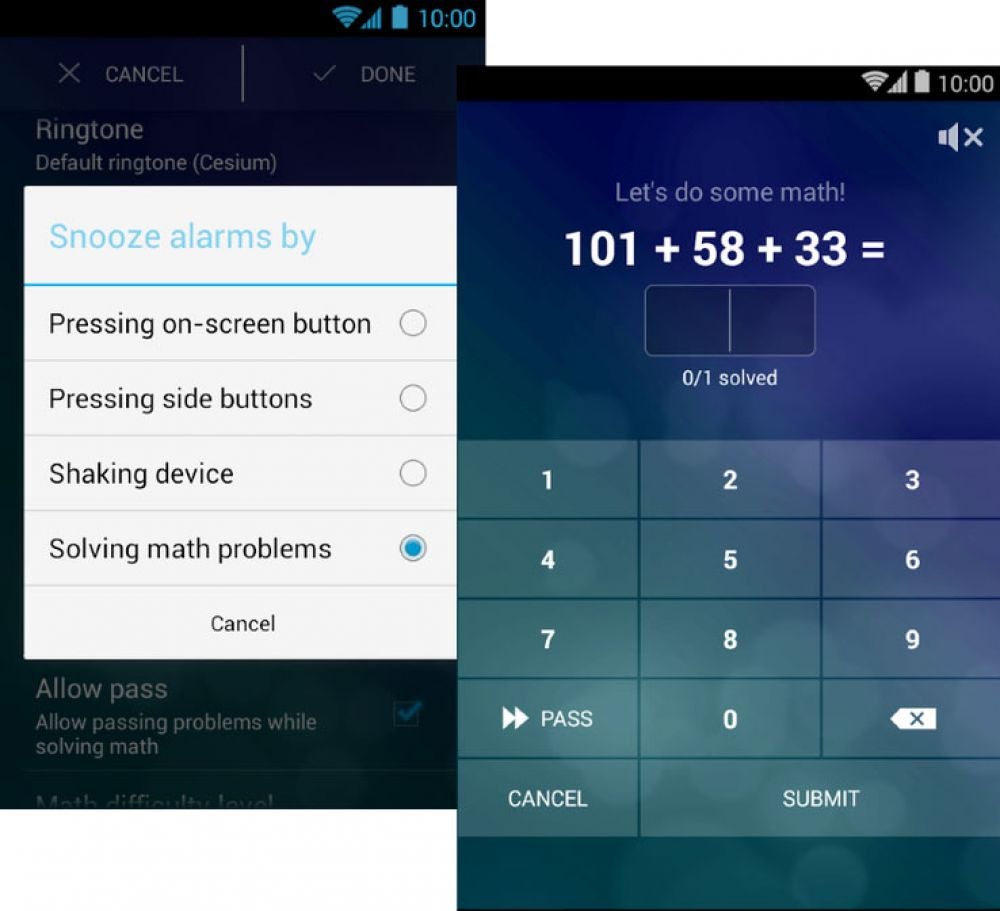 Have you heard of those apps that won’t let you drunk-text someone until you do some math problems to prove you’re sober? That’s one option of Alarm Clock Xtreme, which aims to stop excessive use of the snooze option. It’ll even decrease the time between snoozes, so it’s not always that magic default 9 minutes. It can wake you gently with gradually growing volume. Hitting snooze can involve a shake, the side buttons, pushing the screen, or the previously mentioned math. It all comes with a sleep tracker, stopwatch, and timer option as well. If you don’t mind advertising in your clock, you can get a free version.

Alarm Clock for Me (Free, iOS or Android) 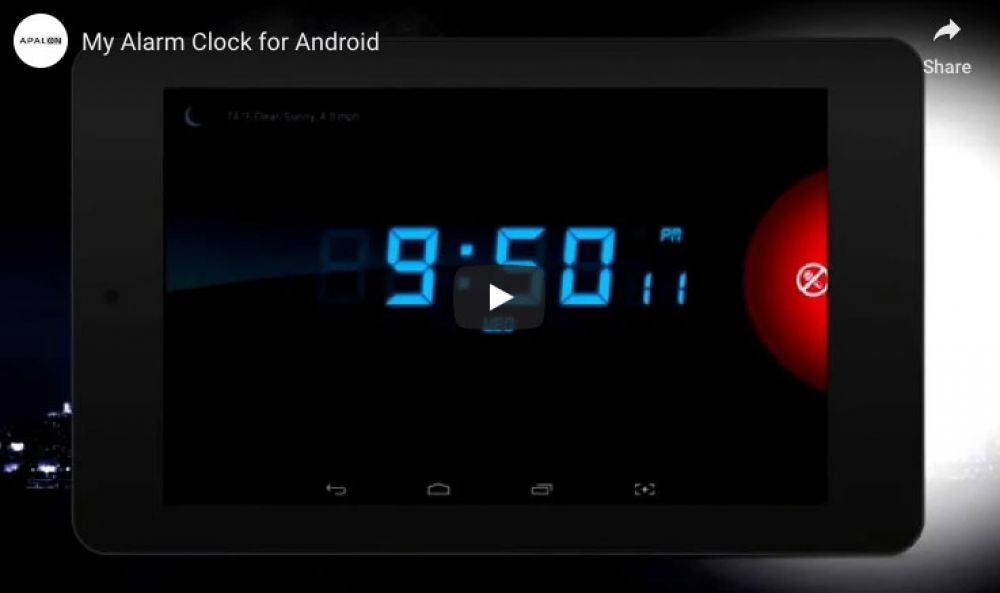 Alarm Clock for Me believes in customization, offering themes for the look of the digital digits, with names like Ultrasonic, Retro, Digital, Worky, Odometer, and C-Motion Clock. On start it’ll ask for Location services to be turned on, so it can also offer you weather updates. Inside the app is the full set of alarm options like using your own music and various snooze options, plus a sleep timer for cutting off music as you start to snooze, a timer, and a shake-to-turn-on-flashlight option. Unlike some other alarm clock apps, this one supports background alerts so you’ll get an alarm even if it isn’t running all night. The app comes with very annoying advertising, though — you’ll need to make a $3.99 purchase on iOS or $1.99 on Androidto be rid of them. 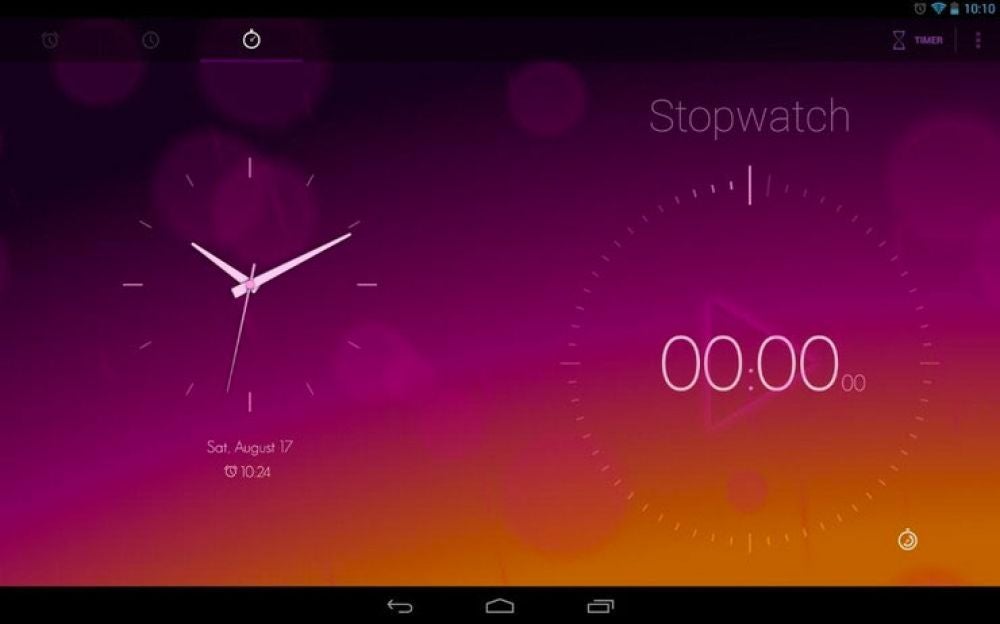 Google liked this Android alarm clock app so much that it acquired its Zurich-based developer, Bitspin. Where it’s different is in using a cloud sync (via your Google account, naturally) so all your devices have the same alarms. It’s a beautiful clock app suitable for tablets, using gestures to set alarms, color schemes for the clock to suit you, challenges to ensure you’re up, a flip-to-snooze, and the option to quiet an alarm when the handset is picked up. 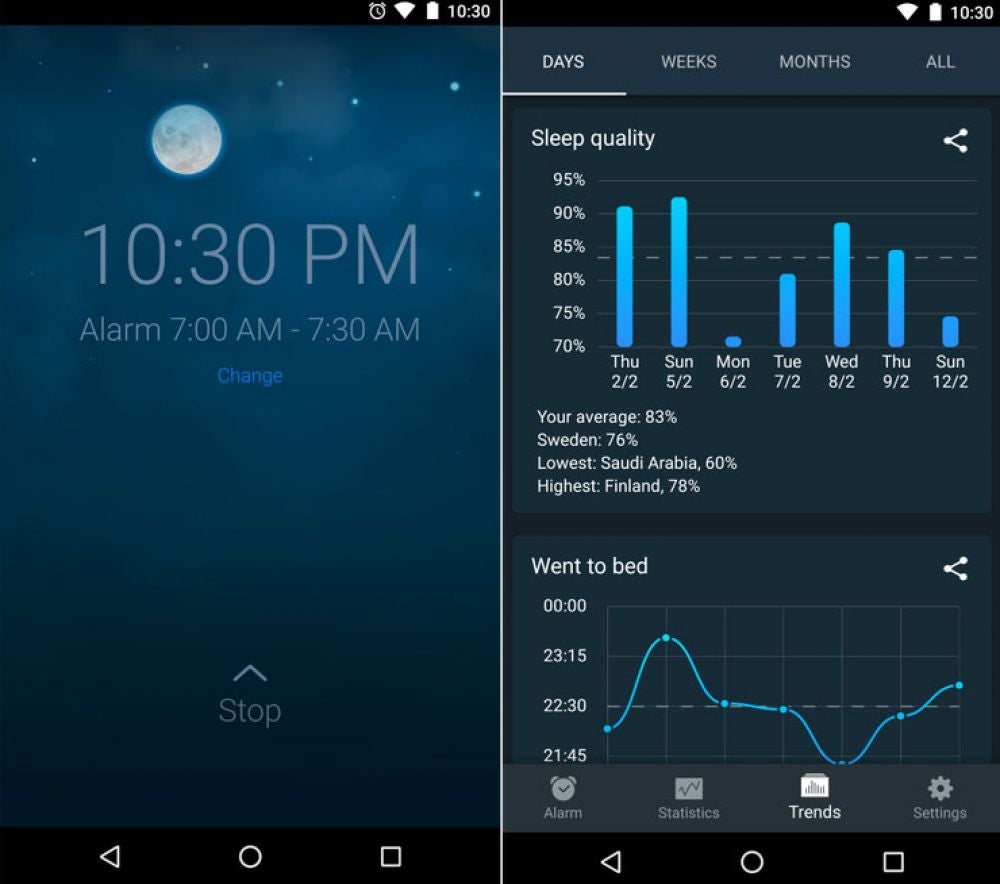 Sleep Cycle is all about rest. This sleep analyzer app uses the phone’s or tablet’s microphone and accelerometer to track your snoozing and finds the best time (during your lightest sleep period) and method to wake you up. It’ll show how your sleep quality compares to the rest of the users of the app. If you’re still asleep, pick up the phone or tap it to snooze, but each snooze gets shorter if you use the Intelligent Snooze feature. iPhone users can sync the data into the Apple Health app, and it will talk to Philips Hue smart bulbs to come on at wake time, in simulation of sunrise. 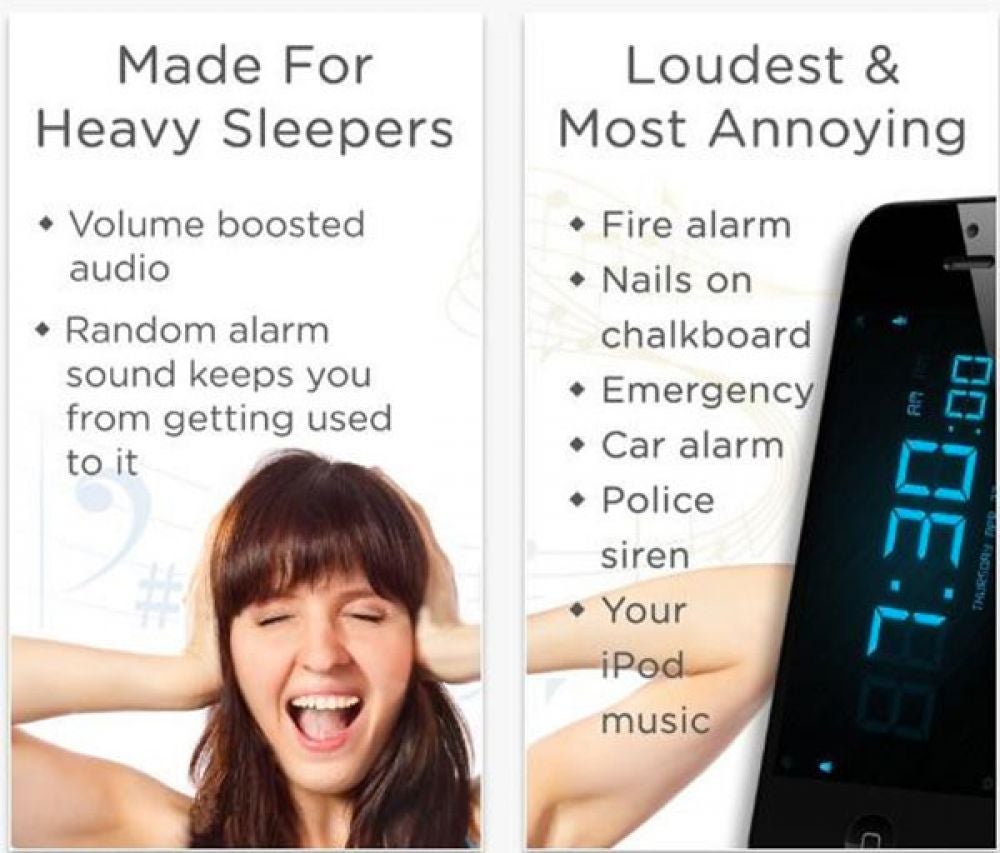 Is there much mystery around what makes this alarm clock stand out? As long as you leave the app on-screen all night, it will play — nay, blare — a sound at a preset time to wake even the soundest sleeper. While you can use your own music from iTunes, the app comes loaded with annoying noises like nails on a chalkboard and a fire alarm. The alarms can be randomized so you don’t get lulled into sleeping through a sound to which you’ve grown accustomed. 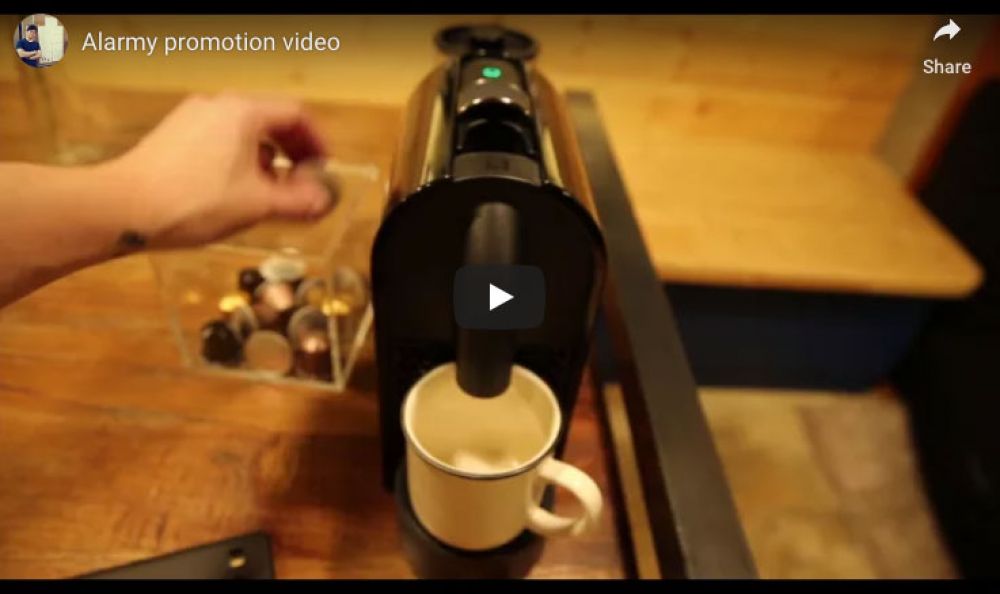 Is Alarmy the most annoying alarm ever? You’ll probably think so if you set it up for its best feature: you have to get out of bed and take a picture with your Android phone of a pre-set location in the house that matches a previously taken shot. Naturally, that place should be far from your bedroom. If that’s not enough, the alarm can also go into a shake-to-wake or calculations mode before you are allowed to turn it off. 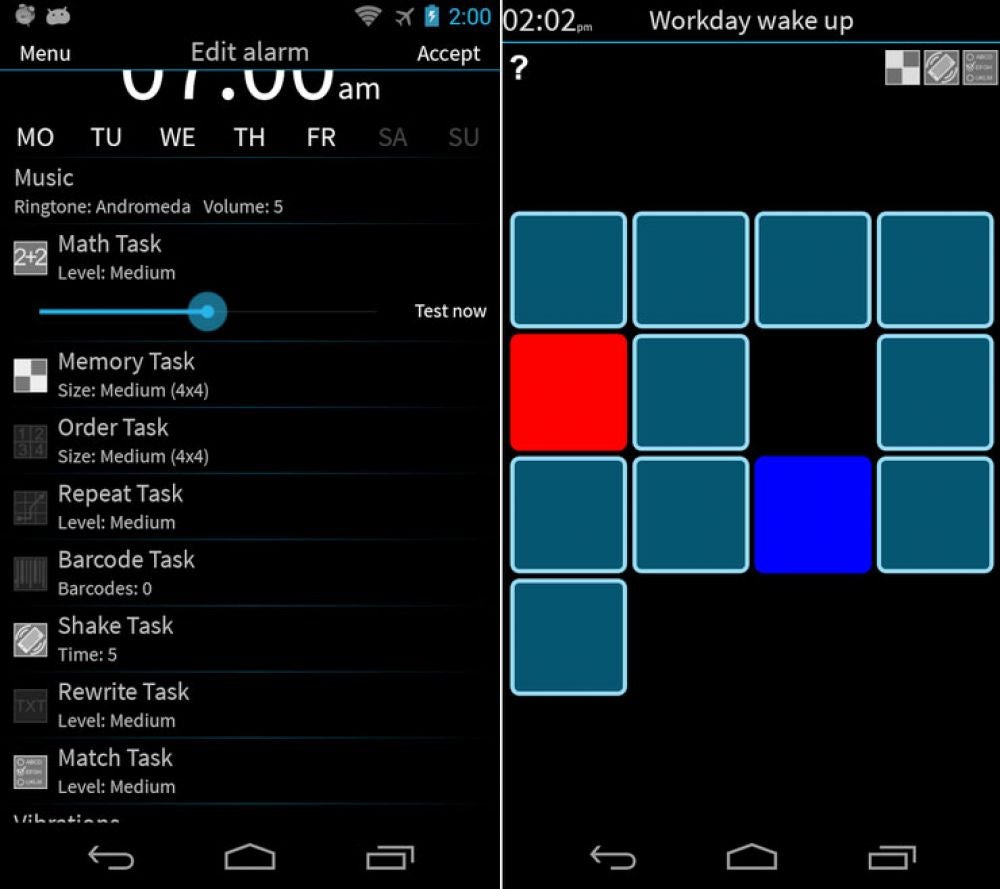 If you absolutely can’t wake up, you need more tasks while the alarm is running. This is the alarm app with ALL the tasks. Memory puzzles, tile ordering, barcode scanning (put the barcode somewhere else in the house so you have to get up), rewriting text, shaking, math problems, and more. The app will play music during the snooze interval, which you may need to calm down after all that task completion. There is a free version with lots of ads. 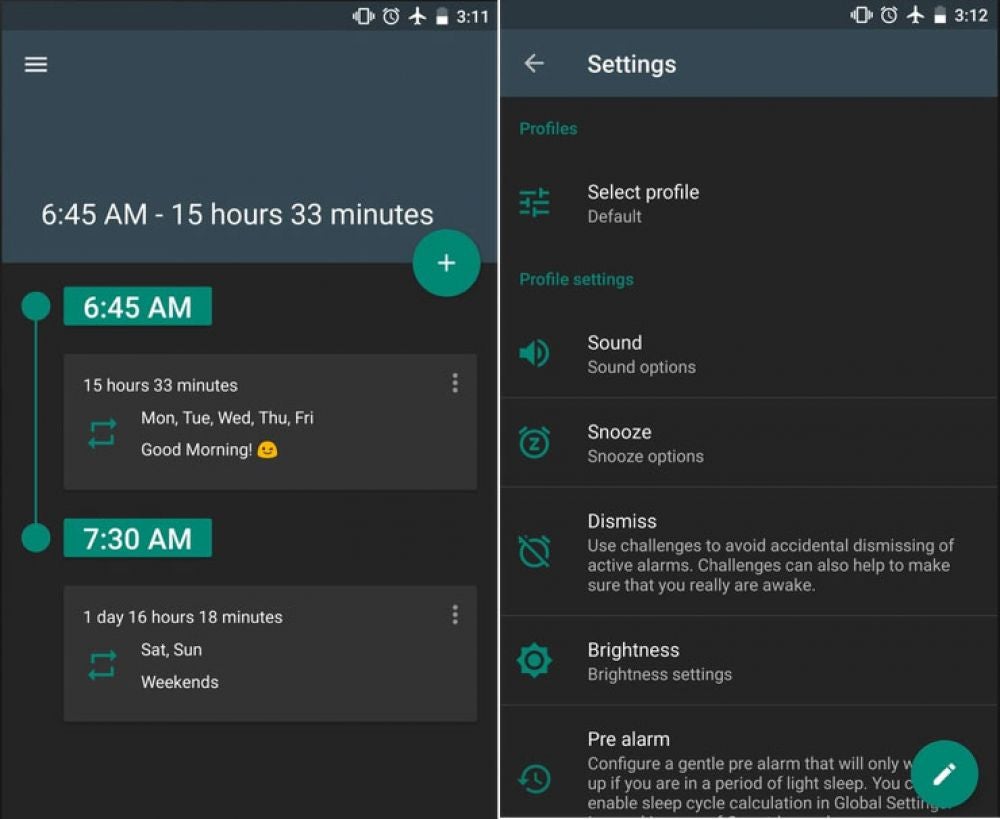 From one-time alarms to recurring to countdowns, each alarm in the AMdroid app has its own settings. That can include challenges for waking, setting alarms that only work in specific locations, even setting it up so alarms do NOT go off during major holidays so you can sleep in. The app integrates with Android Wear smartwatches, so you can use voice commands to the wrist to set new alarms. 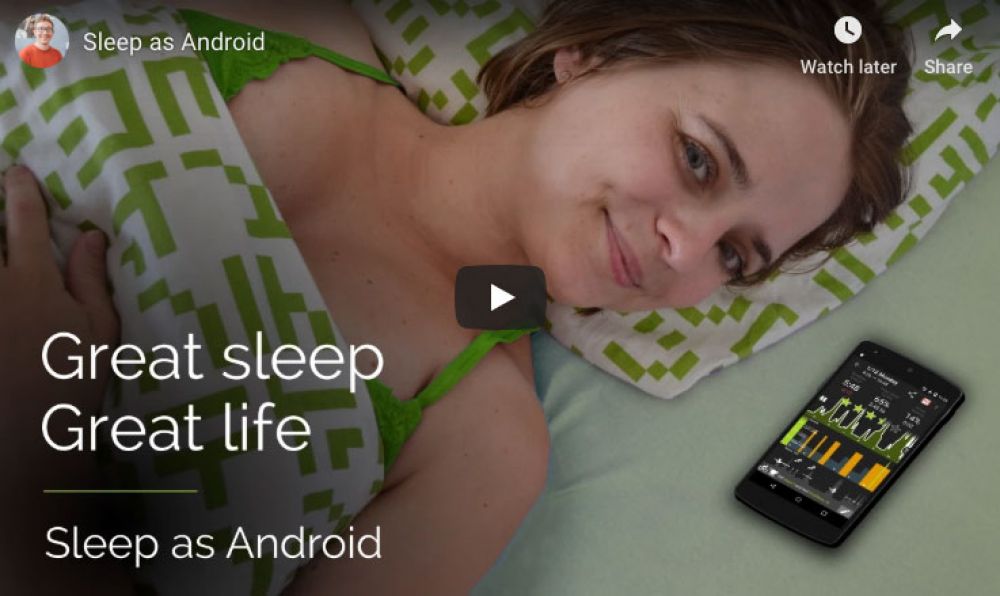 Sleep as Android has your back, from notifying you the night before about your optimal time to go to sleep to the next morning’s alarm. It offers up white noise like ocean waves, crackling fires, and chants. Put the phone in the bed with you and the accelerometer measures how fitful or restful you are, then attempts to wake you at the best moment. It works with smart bulbs to wake you naturally at day break. Then come the alarms, with task options like shakes, math problems, scanning QR codes, entering Captcha codes, even counting sheep (which seems counterproductive). 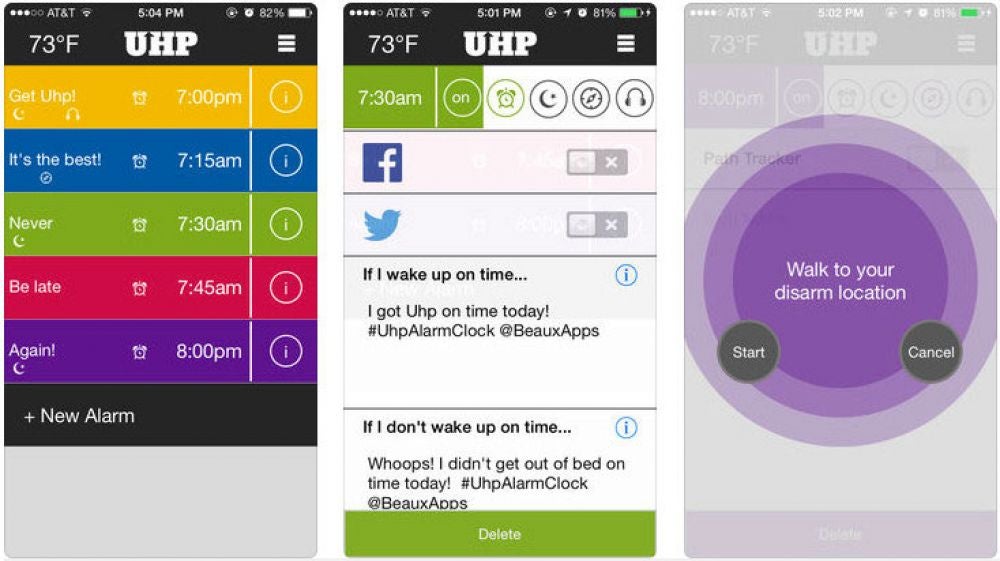 Like many others, Uhp has features like showing you the weather, playing music from Apple Music to wake you, etc. And it has a requirement to get you out of bed by making you walk somewhere as the alarm goes off and confirm it. The difference is, Uhp will post to your Facebook or Twitter account to embarrass you if you don’t get going. 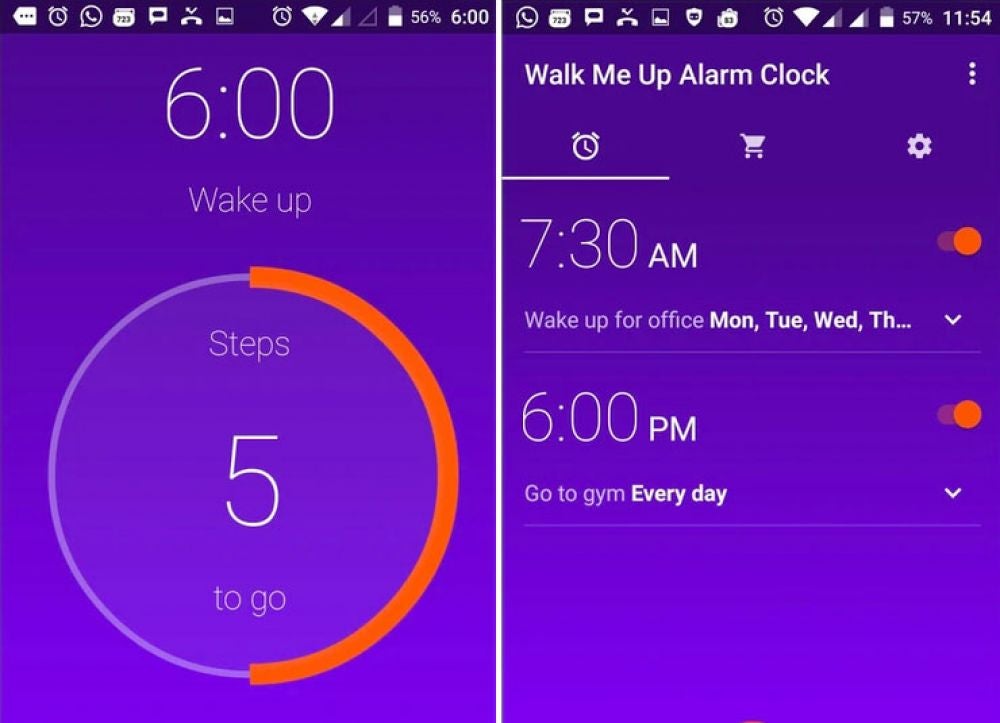 If all you need to do is walk a little to get the waking juices flowing, Walk Me Up uses your phone’s accelerometer to make sure you actually walk a certain number of steps so you can’t just cheat it with a few shakes. There’s also an “evil mode” for disabling the snooze, among all the usual stuff. The app has ads, but you can ditch them for $1.99.

Featured image by Nathana Rebouças on Unsplash In the article here, we share … END_OF_DOCUMENT_TOKEN_TO_BE_REPLACED

Featured image by StockSnap In the modern … END_OF_DOCUMENT_TOKEN_TO_BE_REPLACED

First published in Exchange, the magazine of the … END_OF_DOCUMENT_TOKEN_TO_BE_REPLACED

Uptown Cheapskate is a resale store for young … END_OF_DOCUMENT_TOKEN_TO_BE_REPLACED

A team of neuroscientists in the United States … END_OF_DOCUMENT_TOKEN_TO_BE_REPLACED

This article was translated from our Spanish … END_OF_DOCUMENT_TOKEN_TO_BE_REPLACED

If you buy something through our links, we may … END_OF_DOCUMENT_TOKEN_TO_BE_REPLACED

Although managing inbound shipping can be … END_OF_DOCUMENT_TOKEN_TO_BE_REPLACED