You are here: Home / Entrepreneur / The story of my mother, her Bico Moda brand and how she started her business at 57

As one gets older there are things that are more difficult to do for the first time , and not so much because of decreased abilities, but rather because of the fear of risks. For example, a child riding a bicycle does not think about the scrapes on his elbows and knees that he will surely have, but about the experience it will bring. If he falls, he will most likely cry and soon get up to pedal again. The same goes for undertaking. It’s relatively easy to do it as a youngster when we are full of energy and responsibilities do not overwhelm us, unlike someone who is close to quiet retirement.

That is the case of Bico Moda and its creator, Margarita Pereira , “my mom”. Graduated in Economics, teacher and university professor for more than two decades (curiously in matters related to business strategies), at 57 she opted for entrepreneurship. In reality, the decision was driven by her three daughters, as she did not dare to take this step. As a good baby boomer, she tends to seek security … and that they are part of a generation that had successful entrepreneurs as parents and millennials as descendants who believe they can do anything.

Her steady job is teaching undergraduate degrees, although her true talent is design and tailoring. When my sisters and I were little, she made us spectacular dresses, but we grew up and gave up this hobby, which she took up again six years ago, with the arrival of our first grandchild. It was then that she bought a new sewing machine, needles and scissors, and we set up a small workshop in the house. The first great challenge was to find distributors of quality children’s fabrics, because in Mexico there are few and they are usually very expensive. It was thanks to Google that he found a small businesswoman in Spain, from which today a large part of her supplies is imported and with whom she has created a very good relationship.

Taking up this activity not only excited her to the point of sleeping every day after two in the morning sewing and knitting, but it also prompted her to look for trends and new models. Invariably, acquaintances and strangers asked my sister where she had bought this or that garment that one of her children wore, to which she proudly replied “my mother made it”. In this way, he discovered an opportunity in the market and began to make custom products, mainly for close people. Combination sets for siblings, personalized kits for newborns, Christening gowns, suits for pages, accessories for strollers, frogs with the baby’s name … things almost impossible to buy in a store.

This first success led to the creation of a commercial image. The name chosen was Bico Moda, and the logo is accompanied by an illustration of a Siberian Husky. The reason is simple and totally sentimental: our dog was called Bico, a Galician word that means “kiss” and that made perfect sense with a children’s brand. This was followed by the choice of boxes and bags, as well as the design of ribbons and size cards with garment care instructions. Each of the elements tries to show that it is a personalized experience with great attention to detail; We even wash clothes with special baby detergent, so when you open it, the packaging smells delicious.

Because opening a physical space is very expensive and we do not have enough inventory to enter a store (since most of them are made to order and made to measure), the natural sales channel has been through the website , as well as Facebook and Instagram . The great advantage of these platforms is that we can know the interests of the users and reach a very segmented audience, something especially important for a niche business like this. 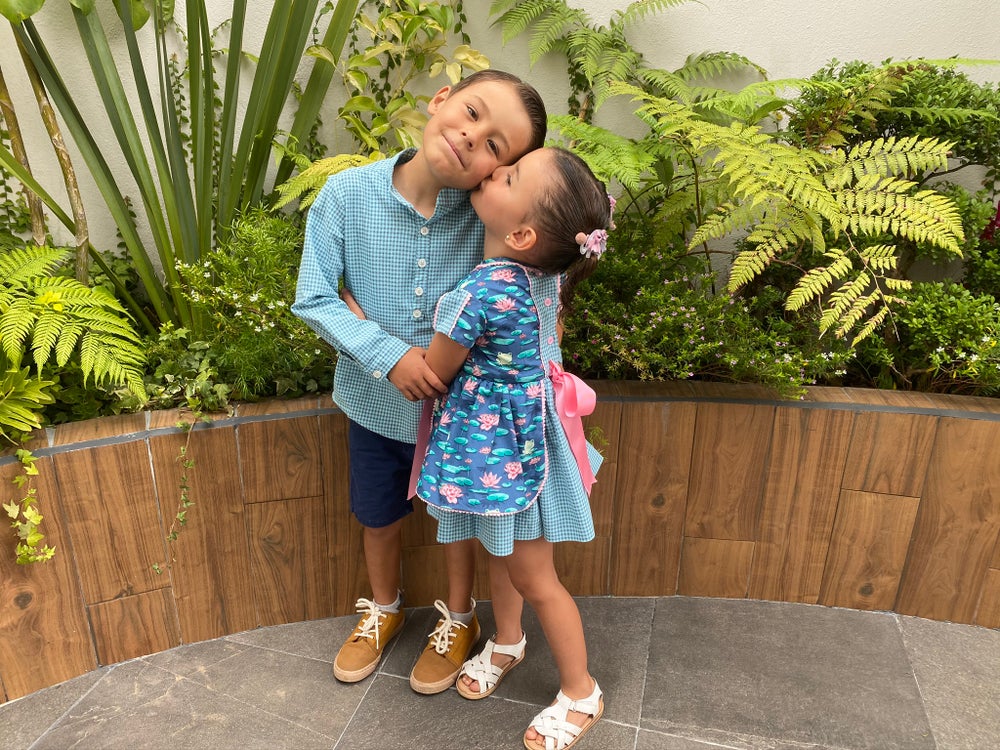 Although it is a young brand, we have faced several difficulties, including the pandemic, which generated a change in consumer habits and problems in obtaining fabrics, as shipments from Spain were suspended for some months. Also, in this short time we have made a mistake by launching promotions and products that failed and we participated in bazaars where we barely recovered the investment. As you might imagine, this has also generated doubts and insecurities in its creator, who, like every entrepreneur, has moments when she mistrusts herself. It is true: numerous challenges have come and will come to transform it into a professional and profitable business, but the dedication that you put into it is reflected in each product, and that is valued by the client.

In her classes – which, due to the pandemic, takes Zoom, which allows me to listen to her many times – my mother constantly encourages her students to undertake and innovate. She, almost without realizing it, is doing it, despite her age and any other real limitations, but above all imaginary, that she may have. Finally, his story is one more lesson that it is we ourselves and not age or context who decide what is possible and what is not possible.

Featured image by Kindel Media via Pexels Many … END_OF_DOCUMENT_TOKEN_TO_BE_REPLACED

As companies continue to intensify efforts to … END_OF_DOCUMENT_TOKEN_TO_BE_REPLACED

First published in Exchange, the magazine of the … END_OF_DOCUMENT_TOKEN_TO_BE_REPLACED

Uptown Cheapskate is a resale store for young … END_OF_DOCUMENT_TOKEN_TO_BE_REPLACED

A team of neuroscientists in the United States … END_OF_DOCUMENT_TOKEN_TO_BE_REPLACED

This article was translated from our Spanish … END_OF_DOCUMENT_TOKEN_TO_BE_REPLACED

If you buy something through our links, we may … END_OF_DOCUMENT_TOKEN_TO_BE_REPLACED

Although managing inbound shipping can be … END_OF_DOCUMENT_TOKEN_TO_BE_REPLACED