He moved to Thailand with $100 in his pocket, became penniless, and then discovered the “secret” that would change his life.

He lived in a tropical paradise. Surrounded by coconut trees and white sand beaches, 20-year-old Andres Pira seemed to be living a life most his age could only dream of.

But sand doesn’t make a comfortable bed, and palm leaves don’t provide much shelter. The truth is, Pira was homeless. He slept on the beach, with a towel for a blanket and his clothing as a pillow. He was in a foreign country, didn’t speak the language, and he owed money to almost everyone he knew.

Starving and angry, Pira called one last friend at home in Sweden. He asked for money, but the friend sent him a book instead — and it changed his life.

Today, the 36-year-old is a real estate tycoon who develops some of the most luxurious resorts in the world. Not long ago, he was a high school dropout and gang member who didn’t think he would see his 20s, let alone Thailand. But anything is possible when you find your “secret.”

Pira is named after San Andres, the Colombian island where he was born. His Swedish father and Colombian mother met there before moving to Stockholm, Sweden when Pira was 3 years old.

Four years later, his parents divorced. Pira drifted between their homes in one of the worst suburbs in Sweden, where segregation was strong. “Growing up in that environment made me believe the world was cruel,” says Pira. “Youth like me didn’t have a future. I was consumed by the idea that I had no control over my life, confident my parents would never be proud of me.”

Pira and his siblings as children in Sweden.

Pira acted up as a teenager, with stunts like hiding dead fish in the school’s air duct. The smell was so strong they had to cancel classes for days.

When he was 15, he started partying hard. He dropped out of school and spent his days drinking in the streets of Stockholm with other dropouts. “I didn’t know who I wanted to be, so I chose to be destructive,” he says.

Partying turned into fighting, and Pira joined a gang. “There was one rule: never show weakness or fear,” he says. “I earned my street cred by landing punches. My knuckles were shattered from hitting bone over and over.”

Pira was arrested several times for assault. “I was on my way to becoming an alcoholic, always one mistake away from going back to prison — or worse.”

One day when he was 18, Pira woke up on the steps of an abandoned building, lying in broken glass with a hangover and no idea where he was. “I thought I was dead.”

“When I got home, the look on my mother’s face was indescribable,” says Pira. “It hurt more than any punch ever did.”

He decided to turn things around. He got a job with a telemarketing company and separated himself from his friends on the streets.

Pira was making hundreds of calls a day — and he hated it. He skipped work so much, he was finally fired. Isolated from his friends, with no education and nothing to do, he spiraled into a deep depression.

His doctor prescribed several antidepressants, but the medication made things worse. “I became paranoid that someone was coming for me. I’d stand by the door for hours, waiting for ‘them.’” It was a complete breakdown. 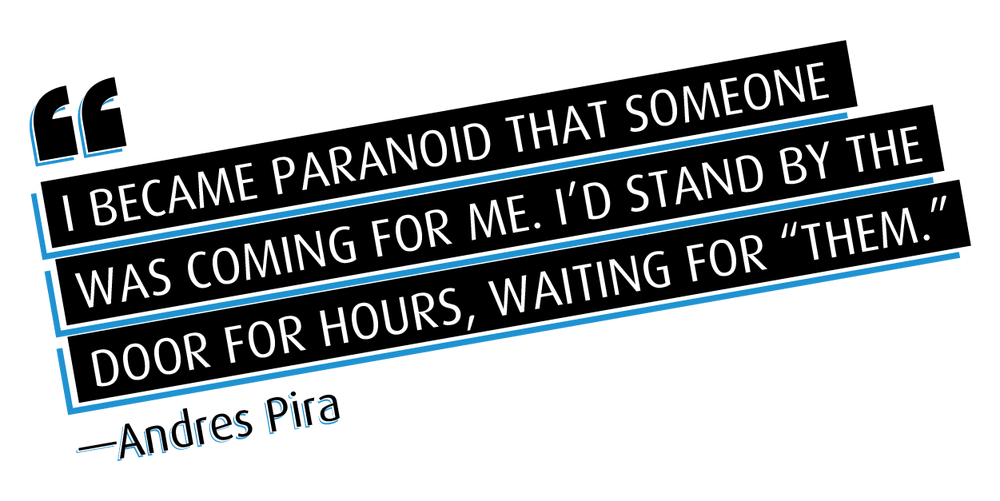 Pira was close to his grandfather; so when he passed away suddenly, Pira realized he needed to do something before it was too late. With the $2,000 his grandfather left him, he decided to leave Sweden and start over. A travel agent recommended Thailand, where the cost of living was cheap. Pira booked the flight.

“How do you tell your parents you’re leaving and you might never come back?” Pira was sick with anxiety about telling his mother, but her reaction was just what he needed. “She told me to follow my heart and do what I felt was right,” says Pira. With her blessing, he left. 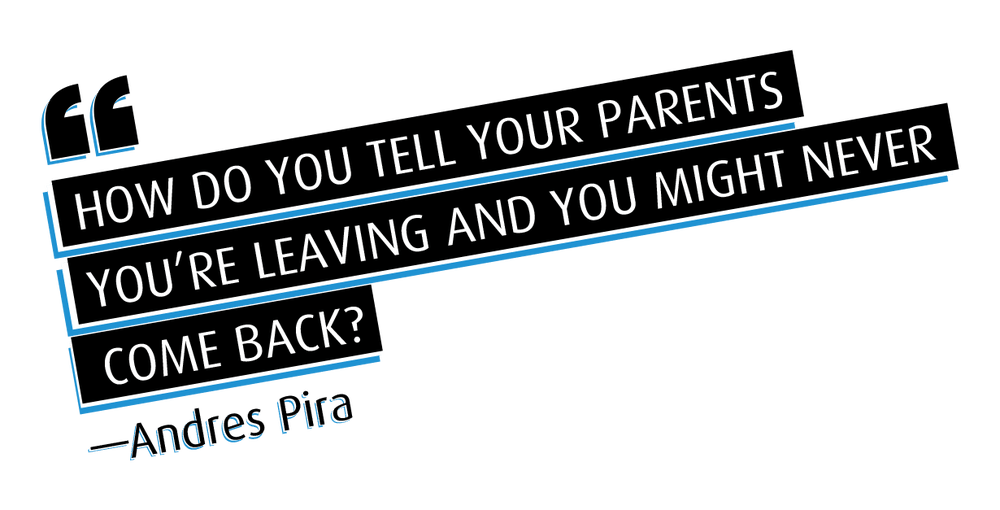 Five days after buying the ticket, Pira boarded a one-way flight to Bangkok with $100 left and dreams of white sand beaches. But when he landed in the busy city full of skyscrapers and smog, there was no beach in sight. Pira realized he didn’t know anything about the country, and he definitely didn’t speak the language.

He spent $50 on a bus ticket to the holiday island of Phuket, where he found a job distributing hotel flyers to tourists. He made the equivalent of around $20 a week — just enough to pay for a small room and a daily serving of noodles. But he was happy.

It wasn’t long before Pira fell into the island’s party scene and started spending money on alcohol instead of rent. He soon owed everyone he knew there, lost his job, and was kicked out of his room. 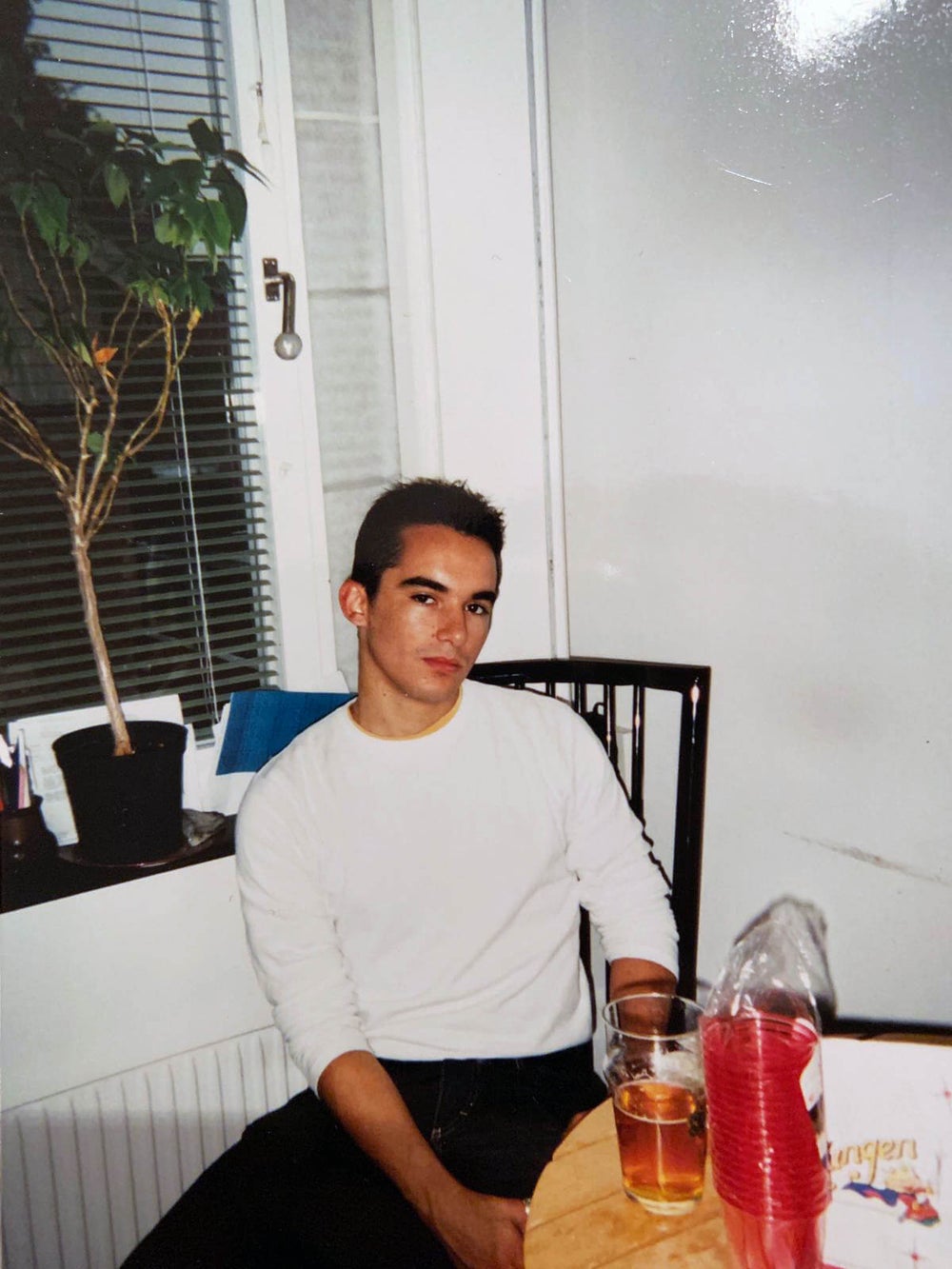 Pira had started drinking at age 15 and soon fell into Phuket’s party scene.

With nowhere to go, Pira wandered to the nearest beach, which became his home. He got up at 5 a.m. every day so no one would find him sleeping there. “Some nights I cried myself to sleep, and others I seethed with anger,” he says. “I blamed everyone for my problems but myself.”

Pira was too embarrassed to ask his family for help, so he started borrowing money from friends back in Sweden. One day he called the last person on his list. The friend refused to send him money but offered to email him a book instead: “The Secret” by Rhonda Byrne.

Pira was angry. “I’m homeless, and you offer me a book?” he thought. But it distracted him from his empty stomach, so he read it. The book talked about the Law of Attraction, the idea that you can attract what you want in life through actions like visualization and affirmations.

“I thought it was ridiculous, so I set out to prove the book wrong,” says Pira. He started visualizing a cup of coffee. “I felt stupid, but I kept at it. Eventually, I could see it and smell it.”

Two days later, one of the beach employees approached him. “I’ve seen you here for a while,” he said. “I thought you could use a coffee. You look tired.” Pira couldn’t believe it. He decided to try his luck by visualizing a meal. After a few days of this, he ran into an old colleague from the hotel — who offered to buy him lunch.

Still unsure what to think, Pira decided to try getting a job. He started asking around town and landed a job handing out brochures for a real estate office. Soon he could afford to rent a small house with a garden. For the first time, Pira felt like he had control over his life.

Making sales on a scooter.

Over the next year, Pira incorporated affirmations, visualization, goal setting, and other principles from “The Secret” into his daily routine. He plastered his walls with his goals and photos of what he wanted in life.

One day he gave a brochure to a businessman who was interested in seeing one of the properties. But the man was flying home that afternoon, and all the sales agents were already away giving tours.

The man agreed to hop on the back of Pira’s scooter to go and see the property. Pira showed him around, and he decided to buy it. “My manager couldn’t believe I closed a sale in an hour, on a motorbike, with no training. That was the first time in my life I felt proud of myself.”

Pira was promoted to sales and worked his way up to sales director over the next three years. When he’d saved enough, he launched his own real estate agency — but he had a lot to learn about running a business.

Several months into the business, he started to struggle. Sales were down and debt was mounting. Pira had to declare bankruptcy.

He’d made poor decisions, like renting a big office right away instead of focusing on sales. He’d also lost the habits that made him successful in the first place. “I stopped doing affirmations, meditating, and learning, and started worrying about losing everything I had built,” says Pira. “I focused on scarcity instead of abundance.”

Pira restarted these habits, and things began looking up. He was once again closing sales, and he soon built a network of buyers and investors, who convinced him to become a property developer.

Finding success in the Land of Smiles.

Pira built several successful real estate companies in Phuket over the next few years. By age 28, he reached multimillionaire status in the local currency. At just 32, his net worth had catapulted into the billions.

Today, Pira is a serial entrepreneur who owns 19 companies with more than 250 employees. Blue Horizon Developments, one of his main property firms, is alone worth billions in Thai baht. In addition to real estate, Pira’s investments include a fitness club, law office, gas station, several coffee shops, and an events company. He is expanding his business globally, starting with New York City and Los Angeles. 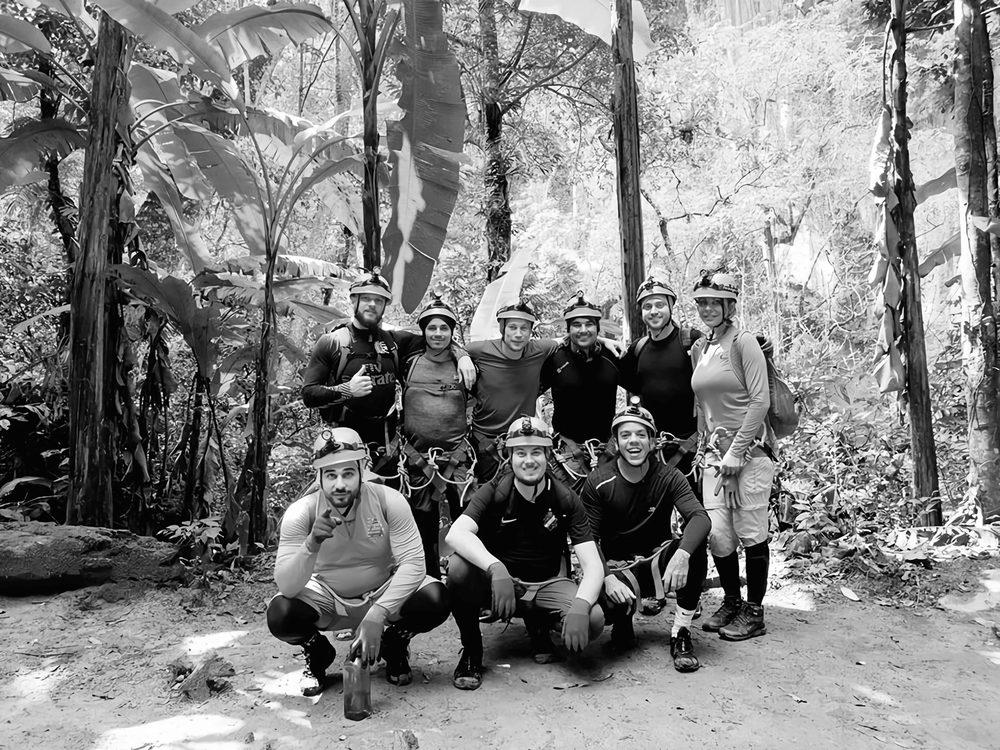 Despite his successes, Pira says he doesn’t want to be remembered as a serial entrepreneur, but as a force for good. He supports Phuket Has Been Good to Us, which improves economic opportunities for local young people. Pira also sponsors other organizations around the world and drove a rickshaw across India for three weeks to raise money for Cool Earth, which protects endangered rainforests.

With his latest company, Success Events, Pira is on a mission to bring others what he calls the most beautiful gift in life: belief in themselves. Headliners at the inaugural two-day event in Bangkok included boxing world champion Mike Tyson and best-selling authors and success coaches Dr. Joe Vitale and Jack Canfield. 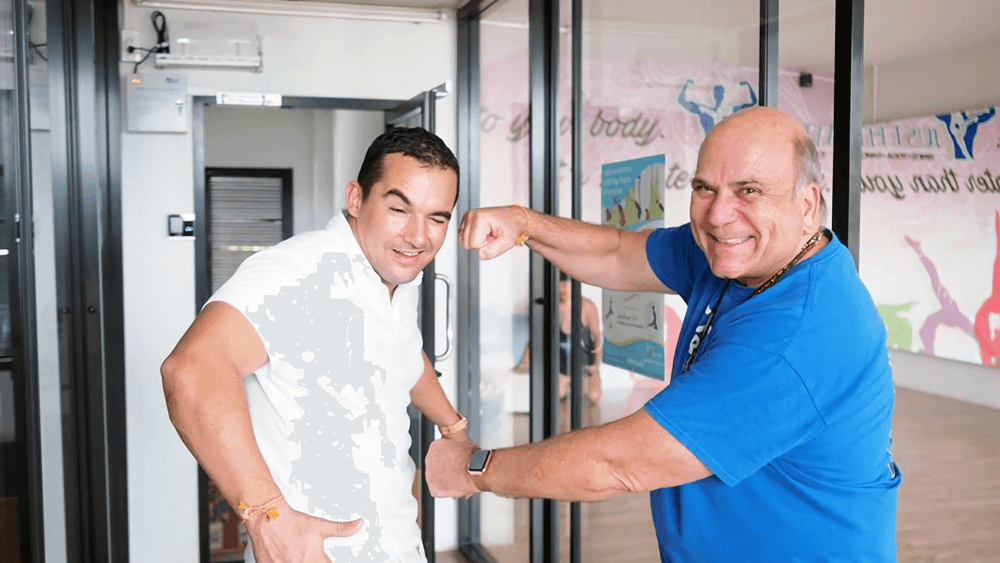 Pira’s story came full circle when he met Dr. Vitale, who appeared in “The Secret” movie, which is based on the book that changed Pira’s life. Vitale convinced Pira that his story could inspire others and helped him release his own book in 2019, “Homeless to Billionaire: The 18 Principles of Wealth Attraction.”

“I’m a high school dropout who has been homeless, bankrupt, and clinically depressed,” Pira says. “I came to a country without speaking the language and with no money. If I can change my fortune, anyone can.”

When he isn’t traveling for business or visiting family in Sweden, Pira still spends most of his time in Thailand. With warm weather year-round, unmatched hospitality, and delicious food, Thailand is precisely the paradise Pira dreamed of as a troubled 20-year-old. Now he speaks Thai fluently and lives every day like he’s on vacation — enjoying the beautiful beaches he used to sleep on.

Connect with Andres on Facebook or read his new book, “Homeless to Billionaire: The 18 Principles of Wealth Attraction.”

This article provides a description of the steps … END_OF_DOCUMENT_TOKEN_TO_BE_REPLACED

Featured image by Tumisu via Pixabay As a … END_OF_DOCUMENT_TOKEN_TO_BE_REPLACED

First published in Exchange, the magazine of the … END_OF_DOCUMENT_TOKEN_TO_BE_REPLACED

Uptown Cheapskate is a resale store for young … END_OF_DOCUMENT_TOKEN_TO_BE_REPLACED

A team of neuroscientists in the United States … END_OF_DOCUMENT_TOKEN_TO_BE_REPLACED

This article was translated from our Spanish … END_OF_DOCUMENT_TOKEN_TO_BE_REPLACED

If you buy something through our links, we may … END_OF_DOCUMENT_TOKEN_TO_BE_REPLACED

Although managing inbound shipping can be … END_OF_DOCUMENT_TOKEN_TO_BE_REPLACED