You are here: Home / Entrepreneur / How a Breakdown at the Airport Led to a Breakthrough for Entrepreneur Jeanine Blackwell

She restructured her life to prioritize what matters most. Now she helps others do the same.

In 2007, Jeanine Blackwell stood at the gate, a “flight canceled” status flashing above her. “We can’t get you out for another three days,” the ticket agent said. Blackwell fought back tears as her world collapsed around her. A missed flight meant a missed school play, broken promises, and more time away from her children. As a mom to three daughters, she desperately needed to get home to New Orleans, but she couldn’t bargain with a Minnesota blizzard.

The cruel irony was Blackwell had built a successful consultancy helping Fortune 500 companies to afford her the freedom to be with her family. But the more her company grew, the more her time was consumed traveling to conferences and on-site meetings

After nights of sitting in a hotel room by herself, facetiming her kids and reading bedtime stories from miles away, the canceled flight felt like the last straw. “I will drive to another airport. I will pay for another ticket. I will do anything I need to do,” Blackwell insisted at the time.

Ultimately, the ticket agent realized Blackwell was not taking no for an answer and found her a seat on another airline. However, the flight home that day signified a much greater departure — one that would lead Blackwell to completely redesign her business model, quadruple her revenue, build a thriving online business, and create the life of true freedom she had always envisioned.

A full ride, then a lost scholarship.

“Finances were really tight in our family growing up,” explains Blackwell. When she won a full academic scholarship to a local university her senior year of high school, it was a game changer. “To my naive 17-year-old self, computers symbolized innovation and possibility.” She decided to major in computer science. A few weeks into programming classes, she was in trouble. “I quickly realized my brain doesn’t think in terms of black-and-white rules.”

The first semester, Blackwell didn’t earn the minimum GPA necessary to keep her scholarship. “I still remember the shame of sitting down at our kitchen table to tell my dad,” she shares. To pay the tuition, she opted to work full time in retail at The Limited. She loaded up on class hours to graduate early (which she did, with honors) and changed her major to marketing and business management. “I missed out on a lot of things working 40 to 50 hours a week and going to school full time, but it taught me to work hard and the importance of focusing on your strengths.”

With this hard-won wisdom, Blackwell went into sales, where she excelled. She started at the Neill Corporation and rose up the ladder until she landed the role of Chief Learning Officer. There, she honed her coaching ability, hosted events, and launched corporate universities, which offered marketing strategies and training to corporations. While she loved her job, Blackwell felt a strong pull that there was something more for her — that she was here to do something that helped other people achieve their dreams.

So, with her experience and contacts, Blackwell started her own consulting company helping corporations build learning experiences; yet it wouldn’t be until years later that she’d learn to run her business on her own terms and create the freedom she imagined.

Marketing her time and losing her freedom.

Flash forward a few years. Blackwell’s consulting business was booming. She was leading million-dollar course launches for Fortune 500 clients all over the world. While this was rewarding, she was traveling nonstop. “It felt like I was on a plane every week.”

What Blackwell thought she always wanted, leaving the corporate world to run her own business, had turned into a nightmare. “There’s no worse feeling than having to pry your kid’s fingers from your shirt so you can head to the airport again to go do something that you don’t really want to do. I began consulting because I wanted the freedom to manage my time and do meaningful work, but the way I structured the business created just the opposite. I had created a business that could only grow with more of me involved.” 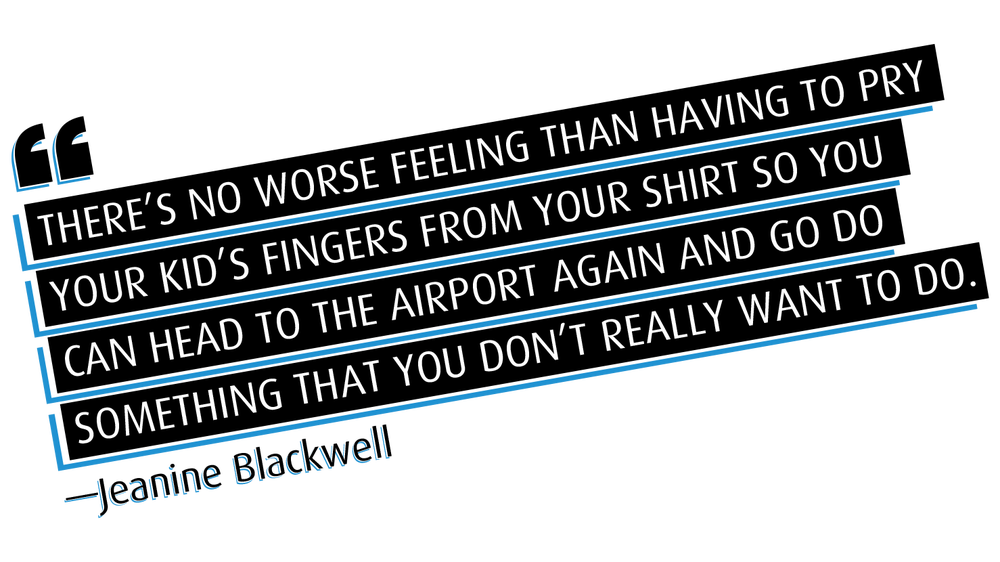 Blackwell knew all too well the tragedy a lack of choices could bring. Her creative father had worked a job he hated most of his life, only to pass away from a heart attack a few years after retiring. Overcome by grief and believing there was no other way out of her pain, her mother took her own life shortly afterwards.

“Watching my parents feel like they had no choice and seeing how that impacted our whole family shaped who I am. It’s a big driver behind my mission to help entrepreneurs create the business and the life they want.”

Blackwell wasn’t about to let a perceived lack of choices shape her own future. She didn’t know how she could earn enough to provide for her family without losing quality time with them, but knew she had to figure it out. “Every time the flight home was delayed, it was all I could do not to have a breakdown in the airport.” When Blackwell finally did, it would lead to a breakthrough.

Sometimes you have to break down to break through.

Now in her 40s, Blackwell decided to restructure her business completely. “The challenge of pivoting a successful business is figuring out how to reinvent the business model while maintaining the revenue level you need to meet all your financial obligations for your family and your team,” she says. Faced with a daunting task, Blackwell did what she does best: she looked at all the possibilities.

In an airport restaurant, Blackwell sketched out a plan on a napkin. Her idea? Flip her funnel around so that she was no longer delivering all her programs and consulting in person and on-site. Instead, she could take her experience as a performance-based learning expert, marketing strategist, and sales leader and create an online course that enabled her to live the life she’d imagined and build a scalable business. 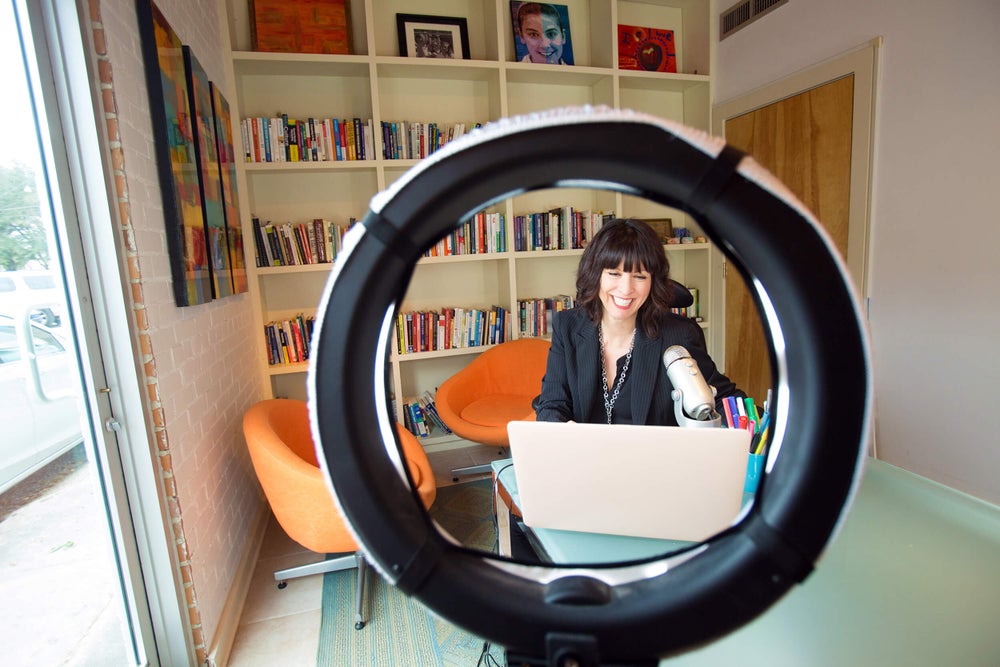 In her 40s, Blackwell restructured her business completely.

From her experience leading open-enrollment workshops, Blackwell already knew her ideal audience. “My favorite people to work with in these workshops were entrepreneurs sharing their expertise. There’s this sense they’re on a mission to get their work out in the world.” She decided to focus her course on helping other entrepreneurs share their expertise in a bigger way so they could live the lives they imagined.

Launching an online business in a few weeks.

Blackwell was racing against the clock. She turned down a large contract to focus on reinventing her business and needed to replace her revenue as soon as possible so that she didn’t let down her family or her team. In a matter of weeks, she built her first online course, applying the skills she’d acquired leading learning design and marketing launches for some of the best-known brands in the world.

The problem was, she didn’t have a massive audience of followers to sell it to. “I had no idea how we were going to fill the course,” she admits.

She’d already identified her audience, so she asked herself two questions: “Where are they hanging out online and how can I get in front of them?” She ran paid advertising on Facebook and other channels. “Any sales we made, we’d reinvest the next day into more paid traffic.”

In a matter of weeks, Blackwell had launched her first online course. “Enrollment closed at midnight, and I went to bed at about 9 p.m. I had a solid amount of students that were coming in, and I thought, ‘Wow, this is working. I can totally scale this moving forward.’”

Today, Blackwell runs a multiple seven-figure consulting business. More importantly, she’s found her freedom: she works in her zone of genius and doesn’t miss even one important moment with her family.

“Freedom means we can make choices in alignment with what is most important in our lives,” she says. “I’ve found my freedom. Now I’m on a mission to help others find theirs.”

With this intention in mind, Blackwell teaches her time-tried method to help entrepreneurs develop their own online courses, sell their expertise, and scale. She has helped hairdressers, artists, business coaches, psychologists, and other types of experts build multi six- and seven-figure businesses teaching what they know. For her work, Blackwell has been named one of the world’s top 40 business coaches by Warren Bennis’s Leadership Excellence magazine. 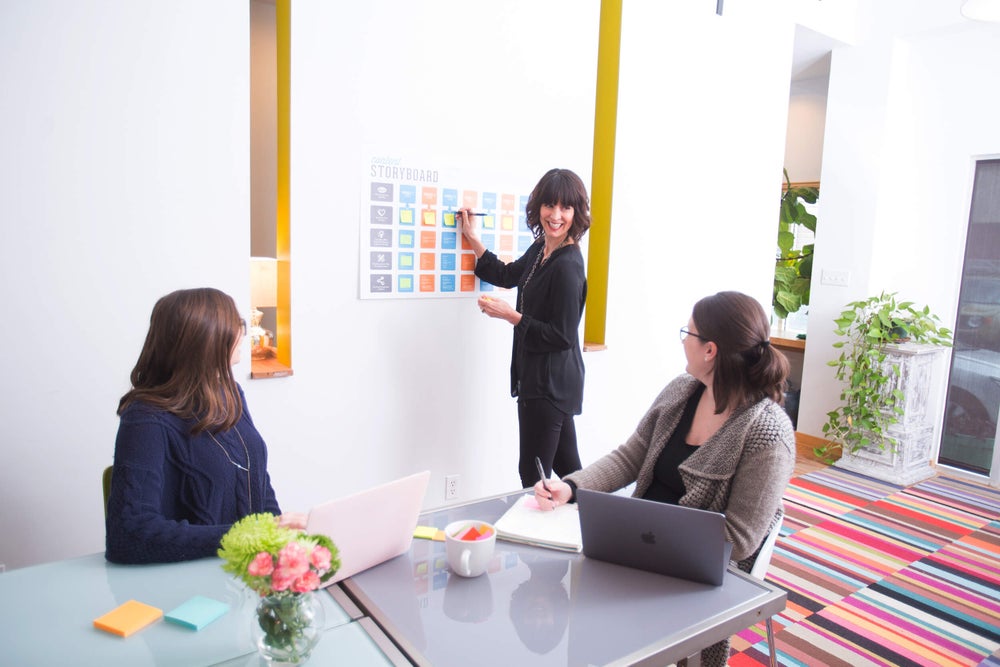 Finding her freedom, Blackwell is now on a mission to help others find theirs.

Reflecting on her career path, Blackwell shares a particularly poignant moment that bookended her journey. “I was watching a video about one of my clients and realized her story mirrored my own. She was a school psychologist who used to spend all her off hours writing reports and meeting with private clients to supplement her income. All the while, she felt like she was missing out on her two little girls’ childhoods. Now she’s created a six-figure business helping other school psychologists — and she has time for her family. When I heard her story, I realized … that was me a few years ago. I was that woman.”

Blackwell could be called a champion of free will. Her greatest wish is for others to become aware of all their choices — even ones that seem off the table. “Take a hard look at your passions and natural strengths. What options do you have that you’re not even considering?” Blackwell insists there are more than you can imagine, and the best time to get started is now.

To learn more about Jeanine and her Expert Experience Method™, click here to read her book, The Expert Called You: How 8 Experts Built a Business and Life They Love, Sharing What They Know (and How You Can, Too).

Featured image by Kelly Sikkema from Unsplash Business runs our world. No … END_OF_DOCUMENT_TOKEN_TO_BE_REPLACED

To keep your business ahead of the curve, it is … END_OF_DOCUMENT_TOKEN_TO_BE_REPLACED

First published in Exchange, the magazine of the … END_OF_DOCUMENT_TOKEN_TO_BE_REPLACED

Uptown Cheapskate is a resale store for young … END_OF_DOCUMENT_TOKEN_TO_BE_REPLACED

A team of neuroscientists in the United States … END_OF_DOCUMENT_TOKEN_TO_BE_REPLACED

This article was translated from our Spanish … END_OF_DOCUMENT_TOKEN_TO_BE_REPLACED

If you buy something through our links, we may … END_OF_DOCUMENT_TOKEN_TO_BE_REPLACED

Although managing inbound shipping can be … END_OF_DOCUMENT_TOKEN_TO_BE_REPLACED