From thousands in debt to helping thousands around the world find success.

At just 20 years old, Dan Lok was already $150,000 in debt. Over three years, he launched 13 businesses — and every single one of them failed. Today Lok is a multimillionaire and business mentor, thanks to the help of one man and his life-altering lessons. Now he’s paying it forward.

Lok with his parents in Hong Kong, China.

Lok’s parents separated when he was 14 years old. He and his mother emigrated from Hong Kong to Vancouver, Canada, later that year. His father continued providing for them, but when Lok was 16, his father filed for bankruptcy and could no longer support them.

“I will never forget the look of hopelessness on my mom’s face and the tears in her eyes,” says Lok. “At that moment, I decided that I would be successful. I didn’t need my dad; I would provide for my mom. I never wanted to see that look again.”

His mother had limited work experience, so Lok supported them by working part-time at a grocery store for minimum wage. After a year, he learned an enlightening lesson: “I was told that I was unemployable because I don’t like being told what to do. I cannot disagree with that statement,” he smirks.

Lok began mowing lawns, delivering papers, and doing anything that had a remote possibility of making money. After high school, he enrolled at Douglas College in Vancouver. He attended full-time business classes while cycling through one failed entrepreneurial idea after another — from vending machines to delivery services and day trading.

Lok maxed out several credit cards and borrowed from everyone he knew. “No one understood why I didn’t just get a job,” he says. “But I knew that I could never repay my debts and provide for my family by working for the minimum wage. I knew I would be better off as an entrepreneur, even if it took a decade. I never gave up because I couldn’t afford to quit — and if you don’t quit, then you can’t fail.”

Lok calls those ventures “losses with lessons.” He acknowledges that most people would have quit somewhere between their first and thirteenth attempt. His response? “Success is on the razor’s edge of failure. When you think it can’t get any worse, hang on just a little longer.”

Picking up trash for mentorship.

Lok offered to buy Jacques lunch, and they talked for hours. When Lok asked to be his mentee, Jacques declined, but Lok wasn’t discouraged. “I visited his office every day for about a month. I did everything possible to demonstrate my willingness to help — including picking up trash around the office — until he finally hired me.”

Lok dropped out of college to work for Jacques. The 21-year-old spent weeks crafting his first sales letter, only for Jacques to tell him it was terrible. Lok rewrote it seven times before Jacques was satisfied. Jacques later confessed that the first draft was “OK” — but “OK” isn’t how you master anything.

Though Lok didn’t earn much money, he says the 12-month mentorship with Jacques was his first “million-dollar year.” Under Jacques’ guidance, Lok started a one-person advertising agency, and within 12 months his clients were generating millions of dollars from his sales letters. By 22 years old, Lok commanded $10,000 per project and was comfortably earning six figures.

“I could finally provide for my mom. I didn’t have to go to the ‘nearly expired’ section of the grocery store anymore,” says Lok. “The mentorship from Alan truly changed my life. That’s why I choose to mentor young entrepreneurs each and every day.”

Several years later, Lok returned to Hong Kong for the first time to visit his father, who was getting by but worried about having a place to live. Walking down the street, Lok stopped and pointed to a window. He pulled out a set of keys and said, “I bought that apartment for you.” The look on his father’s face made all the struggles worthwhile.

Lok invested the profits from his online business into real estate and became a millionaire at age 27. Since his businesses could run without him, he retired as well and set off to “live the dream.” He sat on the beach nearly every day for a month, then spent the next month watching six movies a day. After two months of retirement, he’d had enough.

Lok began sharing his knowledge with a self-published marketing manual, “Forbidden Psychological Tactics.” In a quest to sell the manual, Lok mastered online marketing. He went on to become an accomplished affiliate marketer, sell informational products, and create copywriting software.

Over the next decade, Lok founded or partnered in more than 15 companies in industries ranging from beauty salons to e-commerce. Today their combined sales exceed eight figures annually. Lok attributes this success to three things he lacked early in his career: mentorship, focus, and “high-income skills” like copywriting, marketing, and public speaking.

His biggest regret and motivation.

When his father had a stroke, Lok was in the U.S. chasing his biggest deal yet. “I wanted to make my dad proud, so I told him I’d be with him as soon as I finished. That was the last time I spoke to him. I never got to say goodbye, and it’s my biggest regret. 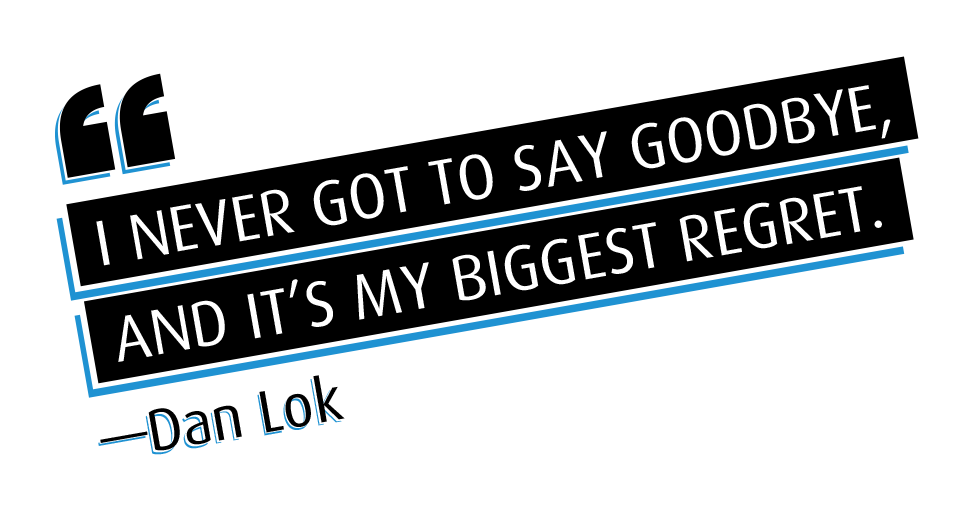 “I realized that chasing money and achievement wasn’t making me happy. Suddenly it all meant a lot less.” Lok’s motivation shifted from providing for his family to providing opportunities for others around the world. Now his mission is to impact 1 billion people by teaching them how to develop high-income skills, unlock financial confidence, and master their economic destinies.

Lok invests significant time teaching others on his social media channels, where he has 4.5 million followers at the time of writing, and on his podcast, “The Dan Lok Show.” Through his video series and programs like “Dan on Demand” and “Tube Your Own Horn,” Lok teaches others to grow their businesses with social media. He has penned over a dozen books, including his latest, “Unlock It!” which hits bookshelves with ForbesBooks in September 2019.

Lok also offers coaching, masterminds, and masterclasses. He teaches sales and other business skills through his High-Ticket Closer Certification Program and Inner Circle mastermind. His project, Closers.com, then matches companies with the high-ticket closers he has trained.

“It’s an entirely holistic method,” says Lok. “I’m proud of all of my students and their success, and it brings me joy to offer them a platform to continually enrich themselves, financially and otherwise. I’ve even hired graduates of my High-Ticket Closer program to work for me in my personal business.” 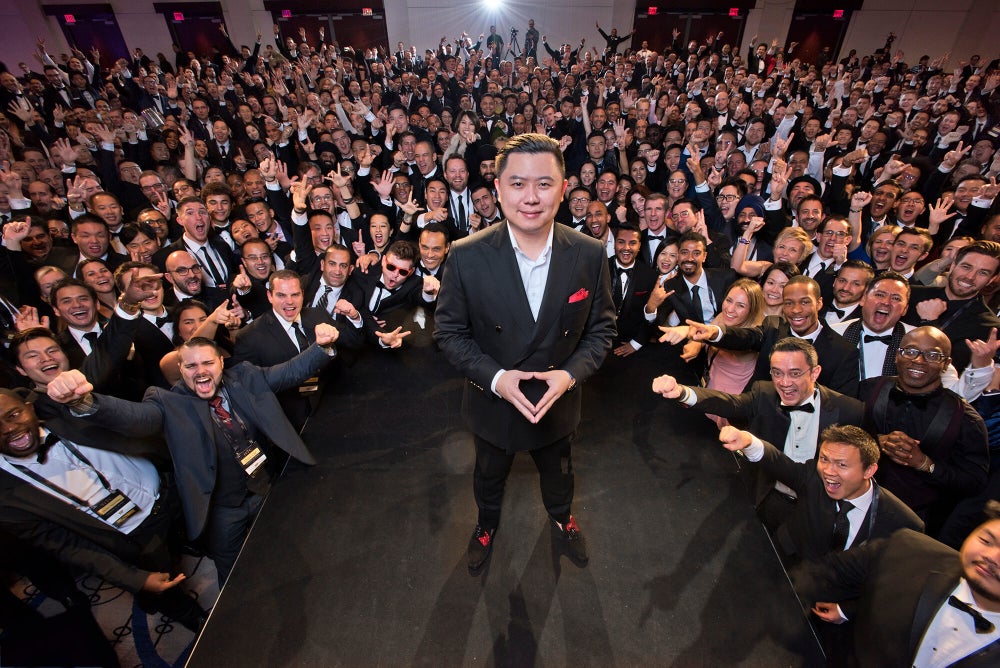 Lok with 1,000 graduates from his High-Ticket Closer Certification Program.

Lok’s wife, Jennie Li, has been there through it all as his chief strategy officer. After meeting at a karaoke place when Lok was 26, they started dating and working together before getting married in 2015.

“Her intuition and instincts are unmatched,” says Lok, who adds that she keeps him humble. “I remember coming home after giving my first TEDx speech. I’m in a red suit, on top of the world, and Jennie tells me to take out the trash. I love that.”

Though Lok is an international speaker who enjoys wearing flamboyant suits, he still remembers his roots. “Who would’ve thought a poor immigrant boy could accomplish so much?” he asks. “No matter where you’re from or what obstacles you’re facing, you can accomplish anything too — if you never give up.”

Connect with Dan on YouTube or read his latest book, “Unlock It!” (ForbesBooks) when it hits bookshelves in September 2019.

Featured image by Kelly Sikkema from Unsplash Business runs our world. No … END_OF_DOCUMENT_TOKEN_TO_BE_REPLACED

To keep your business ahead of the curve, it is … END_OF_DOCUMENT_TOKEN_TO_BE_REPLACED

First published in Exchange, the magazine of the … END_OF_DOCUMENT_TOKEN_TO_BE_REPLACED

Uptown Cheapskate is a resale store for young … END_OF_DOCUMENT_TOKEN_TO_BE_REPLACED

A team of neuroscientists in the United States … END_OF_DOCUMENT_TOKEN_TO_BE_REPLACED

This article was translated from our Spanish … END_OF_DOCUMENT_TOKEN_TO_BE_REPLACED

If you buy something through our links, we may … END_OF_DOCUMENT_TOKEN_TO_BE_REPLACED

Although managing inbound shipping can be … END_OF_DOCUMENT_TOKEN_TO_BE_REPLACED