You are here: Home / Entrepreneur / A Cult Craft Brewer Says Its ‘Beer For Girls’ Is Satire — But Women Are Slamming the Company for the ‘Lazy Stunt’

BrewDog’s attempt at a “satirical protest beer” for girls is falling flat for many women.

“BrewDog will be using its most iconic beer, Punk IPA, as a weapon in this fight, packaging it in lurid pink and renaming to Pink IPA — a send-up of the lazy marketing efforts targeting the female market,” the brewer said in a statement.

The company is also serving the beer at 80 percent of its standard price to customers who identify as women, as a nod to the gender pay gap, as well as donating 20 percent of profits to organizations fighting gender inequality.

However, while BrewDog said the beer is intended to “trigger questions about why women continue to earn less than their male counterparts,” many women saw Pink IPA as part of the problem.

“‘Let’s show that enough is enough with stereotypes…’ by using a stereotype,” one Facebook commenter wrote, adding the crying laughter and face palm emojis. “Sounds like trying to reel in a bad marketing decision.” 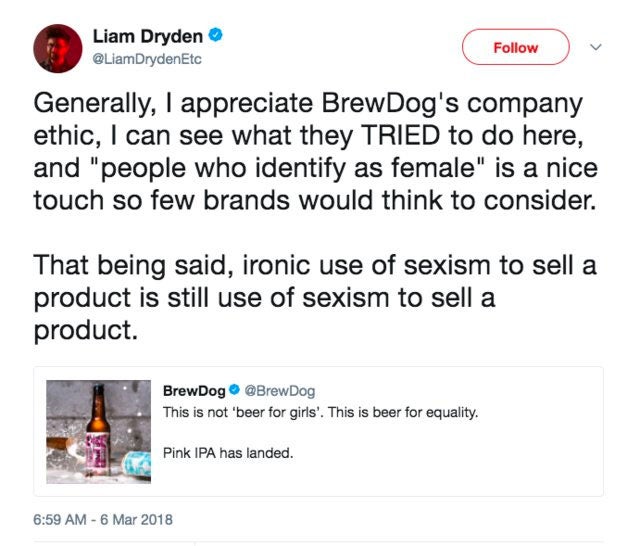 “Still building into a ridiculous stereotype that damages women in the beer industry,” another person commented on BrewDog’s Facebook post about Pink IPA. 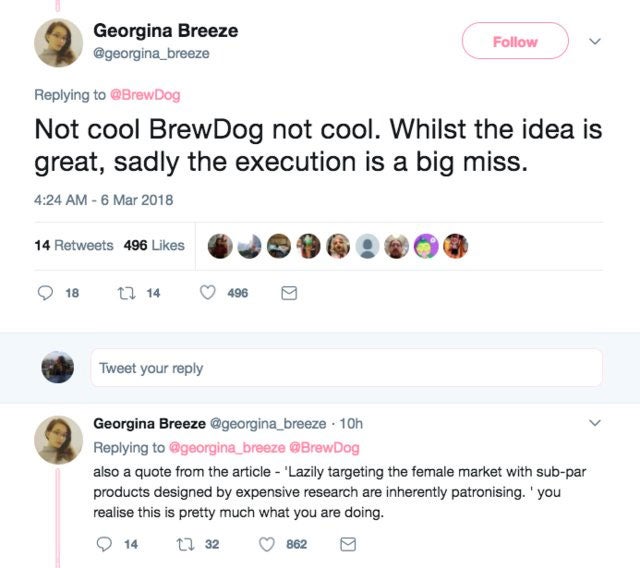 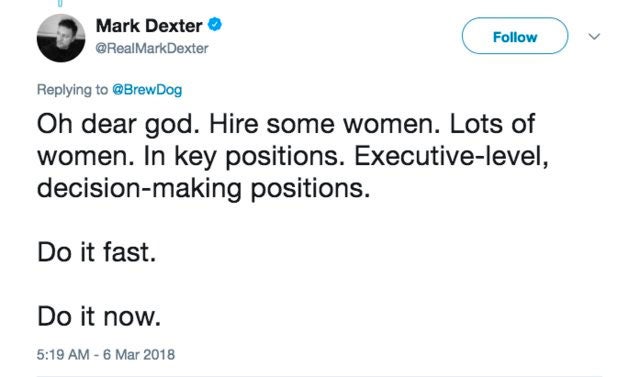 Sarah Warman, BrewDog’s global head of marketing, responded to criticism saying that BrewDog anticipated that some people “might not immediately appreciate the irony of Pink IPA.”

“Pink IPA is clearly an over-the-top ridiculing of the types of sexist marketing we often see from brands trying to engage a female audience,” Warman said in a statement to Business Insider.

Warman continued: “This beer is part of a bigger campaign that raises awareness of the scourge of the gender pay gap and sexism; two issues we think we should be doing a lot more to solve as a society.”

The beer industry has historically struggled to win over women drinkers, who tend to prefer wine and liquor. Some brewers’ attempts to fix the problem, like a beer that branded itself as “the first beer for her,” have been mocked as sexist in their reductive portrayal of women. COVID-19 promoted the adoption of technological models that generate … END_OF_DOCUMENT_TOKEN_TO_BE_REPLACED

Featured image by Jarmoluk from Pixabay A … END_OF_DOCUMENT_TOKEN_TO_BE_REPLACED

First published in Exchange, the magazine of the … END_OF_DOCUMENT_TOKEN_TO_BE_REPLACED

Thanks to this function, you can save notes and … END_OF_DOCUMENT_TOKEN_TO_BE_REPLACED

If you buy something through our links, we may … END_OF_DOCUMENT_TOKEN_TO_BE_REPLACED

If you buy something through our links, we may … END_OF_DOCUMENT_TOKEN_TO_BE_REPLACED

Although managing inbound shipping can be … END_OF_DOCUMENT_TOKEN_TO_BE_REPLACED